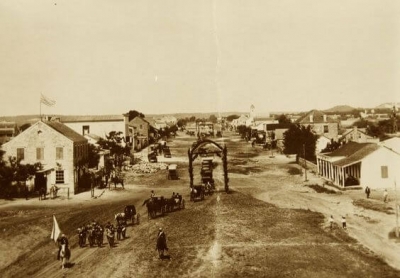 While our city’s current state and its future outlook are rosy, we owe a lot of that to Fredericksburg’s history, a fascinating story.  We honor a past that is full of culture, heritage, and respect for what came before us.  Those pioneers who founded this great town poured their heart and soul into building a new life for themselves and for generations to come.  We owe them a debt of gratitude.

Fredericksburg was founded in 1846 and derived its name from Prince Frederick of Prussia.  John O. Meusebach founded a noble society or “Adelsverein” to purchase land in America for purposes of relocating himself and a group of approximately 125 German settlers to the new land.  He purchased 10,000 acres in the area surrounding Baron’s Creek and Town Creek and planned to allot each settler one town lot and 10 acres of farmland farther out.  The first homes in Fredericksburg were built as not much more than huts with upright oak posts stuck in the ground.  The fachwerk style of architecture followed wherein the spaces between the logs were filled in with rocks and then whitewashed over.

In 1846 the first Vereins Kirche, or first public building, was built in the middle of Main Street. Its location did not pose a problem, however, as our Main Street is reputed to be the widest Main Street in Texas.  Local lore tells us that the settlers needed a wide street to be able to pull their ox carts in a U-turn.  The Vereins Kirche was used as a church, a school, and general meeting hall.   The original building was torn down, sadly, but a replica was built in 1936 for the Texas Centennial celebration.  It now stands in the middle of the Marktplatz, which is like our town square, and is one of the best known symbols of Fredericksburg.  Today it houses a lovely collection of Fredericksburg artifacts and archives and is open for tours.

One interesting fact not widely known is that Fredericksburg was part of a small group of Texas towns or colonies who were pro-union during the Civil War.  As a general rule, Germans did not believe in owning slaves.  However, of course, not everyone agreed. In fact, one local school teacher of the time, Louis Scheutze, was dragged from his home and hanged by the vigilante Haengabande for opposing the confederacy.  This and other experiences left the immigrants to favor isolation and maintain their own German culture. Interestingly, English was not even spoken widely in the public schools until the time of WWI.

Fredericksburg’s first inhabitants were a religious people and often drove their horses and wagons 10 or even 20 miles into town on Sundays to attend church services.  Seeing the need to stay over on a regular basis to do some shopping or trading, many built small dwellings, now commonly referred to as Sunday houses.  Several of these charming structures still exist and many have been converted into B&B cottages.

When Lyndon B. Johnson became President of the United States in 1963, much national attention shifted to this area due to his maintaining a so-called “Texas White House” in Stonewall, just a few miles from Fredericksburg.  The Johnsons attended Fredericksburg’s St. Barnabas Episcopal church when they were at their Texas home.  From that time on, more and more focus fell on the town of Fredericksburg…. a trend which continues to this day.  Today, we estimate that approximately 1.5 million tourists visit Fredericksburg each year.  We are excited to be able to share a little bit of the town’s past and future with those tourists and with you!

Additional resources we found helpful in preparing this article include: